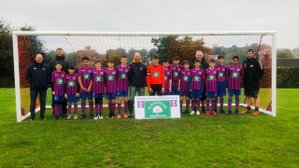 Another really great game to watch and all of the boys played very well.
Two of the Ringmer goals were from defensive errors and the third when they caught us thinking they were off side when they weren’t. So all goals were preventable. It certainly would have been unfortunate to lose the game so it was very pleasing that we carried on playing and pushing to bring about the draw.
We did seem to step up a gear at 3-3 and were the most likely to win it, as was the case throughout the game.
We started with good intensity from the whistle and played some lovely football and pushed the ball around really well. Fin opened the scoring with a very well taken free kick which their goalie just managed to get his fingers to but he pushed it into his own net. So we were 1-0 after 20mins. They pulled back 2mins later to 1-1. We went a little flat mid way through the first half but managed to hold the 1-1 to half time. A few changes were made at half time and we set off sprightly, but unfortunately they took the lead 5mins in. Sam s then scored a great goal to bring us back level, but again it was short lived and they regained the lead 2mins later. We then got our third through a corner from Conor converted by Sam S.
We then definitely went for it but just ran out of time and it finished 3-3.
In all a good game, and we played some great football with some excellent play coming from all areas of the pitch so well done all players.
Tim gave man of the match to Sam S for his brace of goals but it was a close run thing with Sam H, but well done all boys there was some great stuff from every player throughout the game.
Thanks Tim for sorting the team and for James for running the line…
Share via
FacebookTwitter
https://www.heathfieldandhoram
Recent news